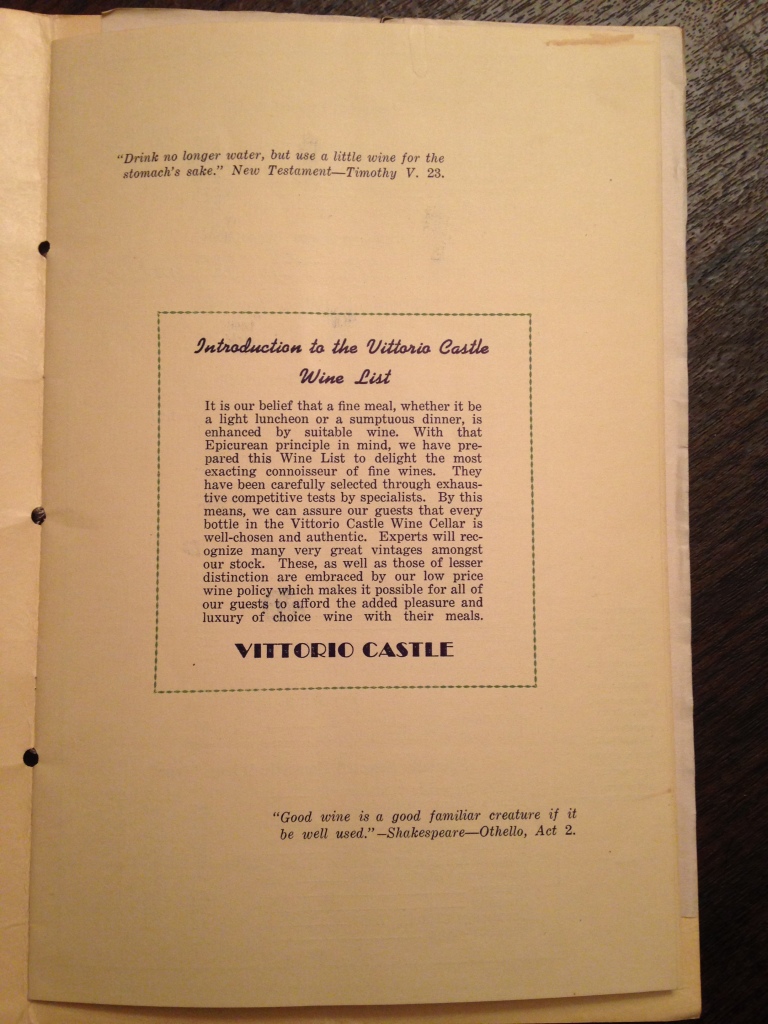 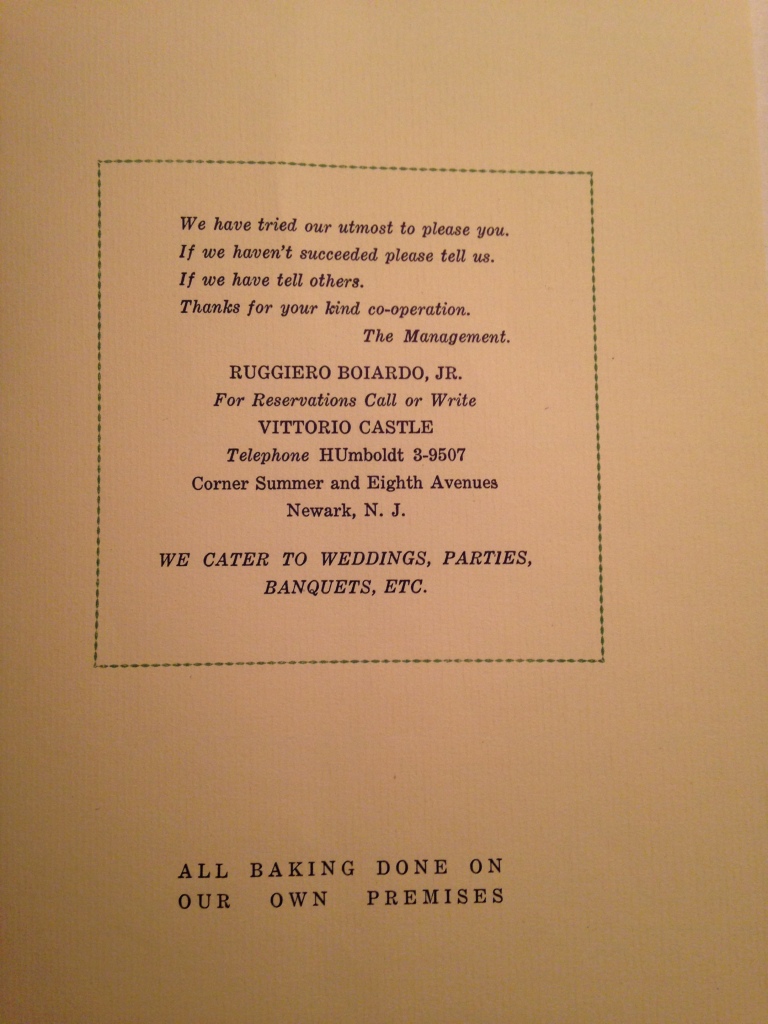 The menu pictured here is from the Vittorio Castle. The restaurant was in business from 1937-1952.This establishment was the most lavish Italian eatery in the former First Ward. Politicians, sports figures, actors, the famous, and infamous all frequented the Vittorio Castle. This menu is the first item I have been able to acquire from this restaurant- there’s just not many items for sale out there. The back story of the Vittorio Castle reads like a good piece of pulp fiction. In Richard Linnett’s,  “In the Godfather Garden: The Long Life of Richie ‘the Boot’ Boiardo,” the story of the restaurant and its owner are explored in minute detail. I found it fascinating and I hope others do as well.

“In 1937, the Boot opened the Vittorio Castle Restaurant in partnership with Henry Abrams, alias Kid Henry, a former pugilist and convicted burglar. The partners signed over the restaurant to Tony Boy in order to obtain a liquor license, which the Boot and Abrams couldn’t hold because of their criminal records, and Tony Boy was put in charge as host and manager.  The Castle was well-named; the exterior was an undulating flow of towers and sturdy Flemish bond brickwork, tall arch windows, and a canopied turret entrance, like a medieval citadel.  It commanded a busy corner of Summer and Eighth Avenues, the main thoroughfare in the First Ward.  The dining room was a banquet hall that could seat a few hundred people. Colorful frescoes, gilded sconces, and mirrors adorned the walls, and faux frescoes gold-leaf chandeliers hung from a twenty-foot ceiling.  “The Vittorio Castle, built after Prohibition, was one of the most notorious nightspots in North Jersey, operating 24 hours a day, unmolested by authorities.”

The Boot, already well into his Orlando Innamorato period, which would last to the end of his life, held court in the Castle, entertaining politicians, gangsters, and celebrities, who came from New York City once they discovered the charms of Newark’s own Little Italy.  In 1939, at his table in the Castle, the Boot gave Joe DiMaggio a four-and-half-carat emerald-cut diamond for an engagement ring for the slugger’s first wife, B-movie actress Dorothy Arnold, whom he met on the set of the Manhattan Merry Go Round.  She was nineteen, and he was twenty-three; they married later that year in San Francisco.

An Alcoholic Beverage Control Commissioner tried to shut the Castle down, arguing that the Boot and Abrams were seen frequenting the place, a violation of a state regulation prohibiting an establishment that served liquor from allowing “criminals, gangsters, racketeers . . . or other persons of ill repute” on its premises. The commissioner sent a letter to Tony Boy ordering him to keep his father and Abrams out of the restaurant, and the Alcoholic Beverage Control bureau subsequently disqualified the Castle’s liquor license.  The Boot applied for removal of this disqualification and obtained references from powerful people-Deputy Newark Police Chief Philip Sebold, Sergeant Edward McGrath of the department’s morals bureau, Acting Police Captain Joseph Cocozzsa in the prosecutor’s own office, several wealthy manufacturers and businessmen, and the pastor of Saint Lucy’s Church.  These men vouched for the Boot, claiming that his record was spotless and he was just “trying to earn an honest living.”  At the time, the Boot had started a demolition company-Boiardo Construction-and had been subcontracted by the city to tear down an old amusement park to make room for public housing.(The amusement park was Dreamland  and the housing project that replaced it was the Seth Boyden Houses on Freylinghuysen Avenue.)

The Boot’s petition was successful, and the disqualification was lifted, but the incident created a scandal. The prosecutor’s office launched an investigation into police department ties to the gangster and another investigation into the Boot’s connection to an Italian lottery called the Rex B, a popular illegal numbers game played by working-class immigrants in the First Ward.  At the time, and apparently unbeknownst to his supporters and detractors, the Boot was also under investigation by a federal court for operating an alky-cooker in Galloway Township in Atlantic County that was raided in 1937; a 650-gallon still, liquor, and twenty-five thousand gallons of mash were seized.  He was indicted on the still charge shortly after the Rex B lottery investigation was launched; he was found not guilty a few months later.

Tony Boy was the man in the middle, fronting for his father. In photos of the many celebrations held at the Castle, Tony Boy is always seen happily glad-handing guests like Vittorio Castle regular Joe DiMaggio, obviously enjoying his role as host; however, the ever-smiling face hid constant anxiety.

On November 30, 1942, less than a year after the bombing of Pearl Harbor, Tony Boy enlisted in the U.S. Army Air Corp. He served at Mitchell Field on Long Island, the home of the Air Defense Command, which was responsible for developing domestic air defense, and he rose to sergeant of the guard, in charge of enlisted men at the base. Tony Boy was admitted to the base hospital after almost two years of service, suffering from migraine headaches, chronic rhinitis, sinusitis, food allergies, and “psychoneurosis, anxiety type, moderate, cause undetermined, manifested by tension, nightmares, anorexia, fatigue.”  He told doctors that he was constantly worrying about his family, especially his mother, and was angry at his sisters for neglecting her.  “Patient very attached to mother, who has had three major operations in past five years.”  He said, “I dream about her funeral lots of times.”  He was taking ten to twelve aspirins a day and sleeping pills.  On October 13, 1944, Tony Boy was honorably discharged for being “below prescribed physical standards for induction.”

The Vittorio Castle’s liquor license was renewed under Tony Boy’s name while he was still in service. When he got out, he divided his time between the restaurant and a variety of so-called legitimate jobs.  He worked as a sales executive at the Harrison Oil Company, which his father owned.  He later was named secretary treasurer of the Mary Ann Park apartment building complex on Bloomfield Avenue in Caldwell.  The complex was built and managed by LaFera Construction, which subcontracted jobs to Boiardo Construction.  Owner Joe LaFera was a close friend of Tony Boy’s, who invested $40,000 in the project when it was being built.

The kid also claimed occupations as a clothes manufacturer, working with Lanby Manufacturing in Newark; president of Trenton-based TrenMetal Inc. (formerly Kool-Vent Aluminum Awning Company of America), a company owned by Jerry Catena; and a job at R&Y Novelty Company in Newark. He later managed the Sorrento Restaurant, another North Ward eating hall built by the Boot after the Vittorio closed in 1952.  (The castle structure was used by Boiardo Construction as an office while it was a subcontractor on the Columbus Homes, a public -housing development that raised the heart of the First Ward in 1953.)”

Today it would be very difficult to figure out the exact location of the Vittorio Castle without a surveyor. The Wynona Lippman Gardens  now occupy the tract of land where Eighth Avenue ran and the Vittorio Castle stood. Only Saint Lucy’s Church stands as a silent sentinel to the vanished First Ward.