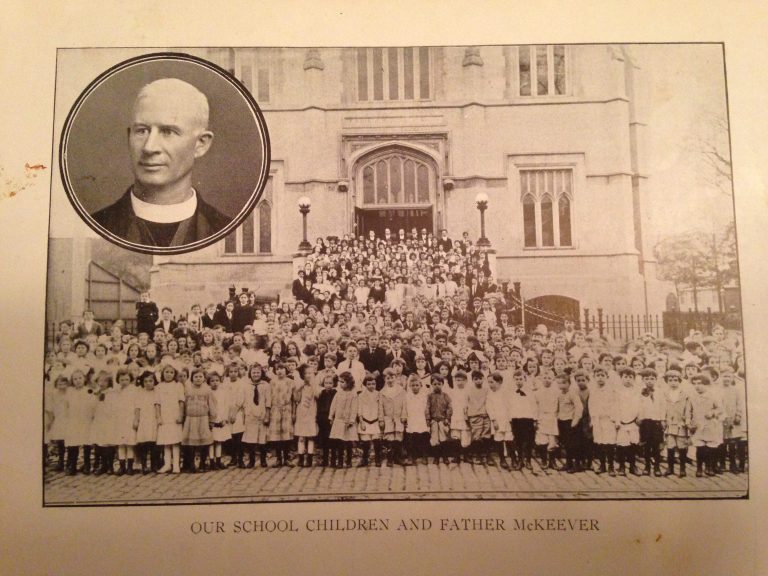 The St. Rose of Lima parish in the Roseville section of Newark had grown rapidly since its founding in 1888. The pastor, Fr. McKeever  decided the time was right to open a parish school. On October 14,1891 the Father purchased a small, vacant, frame church for 5,500 dollars. The vacant church was former home of Roseville Methodist Church which had relocated to a beautiful new stone church on the corner of Bathgate Place and Orange Street. On September 11, 1892, the St. Rose of Lima school opened with a handful of students.

As the first decade of the twentieth century was ending , it was decided to build a new school. Not just any school , but a brick school with carved limestone trim. To begin the foundation work the school building was moved back to where the current rectory is located.

On April 12,1908 the cornerstone was laid. Many religious and civic leaders attended including Jacob Hausling the Mayor of Newark. Most of the dignitaries , the mayor included, said a few words. The new school opened with little fanfare on January 6,1909. In 1945, eight classrooms were added to the front of the building.

In 1975, my neighbor, the late Arthur Wilson, became the first lay principal of the St. Rose of Lima School. He held that post until the school closed in 2008. He was very proud of his tenure at the school. I believe that he truly loved that school and its students. It is said that all things must end and so it was with St. Rose of Lima School. No one could deny that it had served its community well. St. Rose educated Roseville’s children for almost five generations . Today the Roseville Community Charter School occupies the building.

The color post card of the school predates the construction of the present church which was dedicated in 1927. Note that the name of the school is wrong, it says: Roselimar Parochial School.